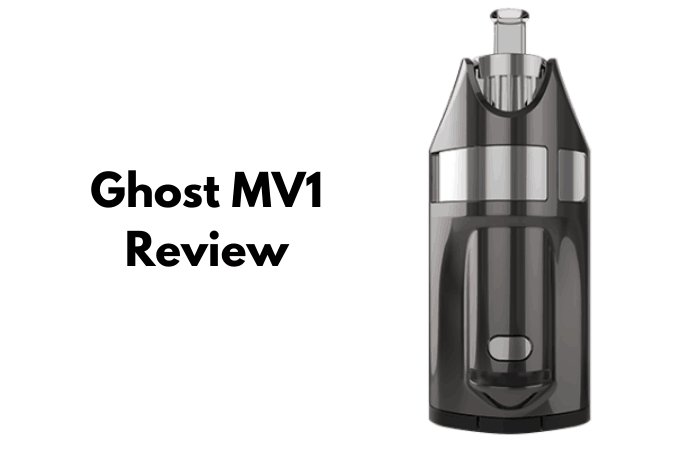 The Ghost MV1 vaporizer has been heralded as the poster boy for next generation vaping, touting innovative re-workings such as improved distribution of heat, expanded battery duration, and bluetooth connectivity. Here, I will attempt to evaluate the MV1 in four different categories to give you all an idea of the experience:

The juxtaposition of the smooth black and crisply green-highlighted box containing the MV1 against the boring, frayed cardboard package it was shipped in draws you in immediately. You pull the MV1 box out of the shipping container and take a long look at its exterior, with a wave of excitement that harkens to Christmas mornings and the momentary apprehension one often feels when looking at a field of untouched snow right before jumping in to make snow angels. Lifting the lid of the box, your eyes meet a chromed out object that looks like it could be a mini spaceship made of the same material as Wolverine’s claws. It is beautiful. The glossed finish and the soft curved edges certainly catch the eye as compared to other vaporizers on the market. When you pick it up, it has a nice dense weight that exudes quality, again increasing your anticipation to actually get it going and take some hits. Overall, the bold aesthetic of the MV1 outmatch any I’ve seen on the market to date, and makes you feel like the kid on the block with the brand new gadget that all your friends are clamoring to try.

As glowing as my review of the appearance and feel of the MV1 is, I have to make a stark transition from positive to negative when it comes ease of use. Opening the latch for the bowl is relatively intuitive, but as you work through the rest of the operation you quickly start appreciating that you have not yet smoked before trying to operate this thing.

The bowl is quite shallow as compared to other much smaller vaporizers on the market. The general girth of the MV1 gives the impression that you would be able to pack a hefty bowl for sustained rotations; however, one is met with what I can imagine is the same dissatisfactory realization a girl feels when she pulls down the pants of a guy who has erroneously taken out a Magnum XL condom from his wallet.

Adjusting the mouth piece was also a hassle as significant resistance when adjusting it just pops off the top module of the device entirely. Figuring out the temperature setting and battery level also is more difficult than it should be. You have to progressively click the one button on the back to get to different settings, which sounds like a no brainer, but not so much as it appeared to skip settings and the color specific LED lights were not as distinct as the manual made them out to be.

To start hitting it in order to get your first mouthful of vapor you need huff and puff on the piece like the wolf from the 3 Little Pigs. But once it’s up and going, the hits were smooth and had great flavor. However, they were short-lived because the bowl containing your herbs would exhaust rapidly due to its small volume.

Overall, the MV1 made me feel dumb, and as you can guess I don’t like when my vapes make me feel dumb. I just wanted to pack it, turn it on and hit it, but it ended up being more complicated than that. Other vapes I’ve used have a much easier flow of use with less blinking lights and tech specs which left me thinking: have we gotten too smart for our own good? Vaping should be simple, the MV1 is not. But I guess I’ll get used to it

Despite its issues with ease of use, the MV1 did produce a very pleasant vapor. It never tasted burnt, it wasn’t too hot, and the vapor produced was light and tasty. The upgraded heating distribution technology seemed to have been a slam-dunk given the quality of hit. As a mentioned before, it does take some effort to start getting the vapor out initially, but once it’s going, it’s smooth.

I imagine this is due to the airflow mechanism that minimizes drag significantly and allowed for deep continuous hits. So overall, the MV1 does produce a great hit but one should keep in mind the caveat of short rotations due to the shallow bowl that will need frequent repacking.

Just on a more technical note, the battery life of the MV1 is substantial and was a pleasant surprise. Hundreds of hits could be taken on the MV1 before the battery pooped out, so for many users this may counterbalance some negatives I’ve mentioned before.

No one wants to be on a hike to their favorite wilderness location, find a nice patch of grass with a breathtaking view, pull out the vape for a few well deserved hits to ice the cake only to discover the battery is dead. So quality battery lifespan with the MV1.

Overall Impression – Should we buy the Ghost MV1?

Beauty over usability I think sums up my experience with the MV1. Don’t get me wrong, it is a great vape with an outstanding vapor production and being honest that’s what everyone is looking for when using a vaporizer, right?
Yo need to go through the learning curve and everything will be ok.